bringing the farmers market to you!

We are pausing home deliveries for the summer. We are unbelievably grateful for all your comments, suggestions, purchases, and smiles. See you all later this year.

About: Though most people think of Rhubarb as a fruit, it is really a vegetable closely related to sorrel. The exception to that rule is the State of New York, which decided in 1947 that since it was used like a fruit it should be classified as a fruit and that was that. After all–who wants to eat a vegetable pie for dessert? Initially cultivated for its medicinal qualities, it was not until the 18th century that rhubarb was grown for culinary purposes. Popular rhubarb varieties include Valentine, Crimson Red, Macdonald, Tilden, Canada Red and Victoria. Rhubarb is tart, very tart, which is why it should be cooked with some kind of sweetener. Rhubarb leaves should not be eaten because they contain high levels of toxic natural compounds.
Nutrition Facts:

Remove leaves and trim stem. Place in plastic bag in refrigerator for freshness that lasts up to 2 weeks.

Remove leaves, trim stems and peel any stringy covering before consuming. To cook rhubarb just chop it up, toss with sugar and roast in the oven. A nifty addition for salads or rice. Rhubarb can be frozen or canned. One pound of raw Rhubarb yields about ¾ cup cooked.

You can eat rhubarb raw. Back in the old days before Twizzlers and Sweet Tarts people used to dunk the end of rhubarb stalks into sugar or honey!

For more recipes and to learn more about rhubarb than you ever dreamed possible, go to The Rhubarb Compendium, an entire website dedicated to Rhubarb. 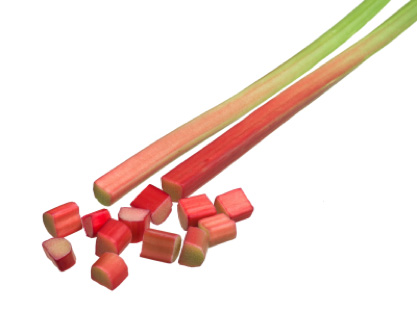